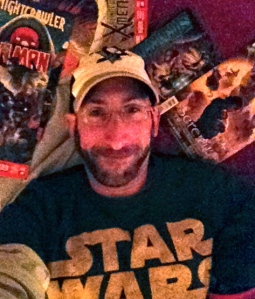 I guess you’d say I was a late bloomer; I hung onto my childhood vices of reading comics, watching and reading science fiction films, programs, and books, and playing role-playing games well through high school and into my 20s.  In fact, I’m not a great artist, but I’m above average, and I credit comic books for teaching me most of what I know about drawing and anatomy.  But this was something you didn’t divulge back then in the ’80s and ’90s….unless you wanted to be even more publicly ostracized than you likely already were and make those teenage years of being an artistic geek rather than a football player even more of a living Hell.

Flash forward 15 years, and I was driving past the comic shop I used to frequent, and, out of a sense of nostalgia, I picked up some comics to read while on vacation. The next thing I knew, I was back to reading them regularly.

The difference is that now the universe has turned on its ear, and geek culture is about as mainstream as anything can possibly get.  There are gym rats working out in Captain America t-shirts, adult-sized hoodies that look like superhero costumes, sci/fi and superhero movies are the hugest box office hits, and people don’t think twice about any of it.  Target, Old Navy, and various stores at the mall sell Star Wars and comic book t-shirts, hats, and accessories.  Somehow, inexplicably, even the British cult television show Dr. Who has made a major surge into American popular culture and acceptability.   Would a show like Big Bang Theory have had such popularity and such an impact on merchandizing 20 years ago?  Would Game of Thrones be the best thing on T.V., viewed, discussed, and anticipated by so many?  I can’t honesty see either as having happened, but somehow escapist fantasy has taken over.  It’s so weird to see the things for which I worried about getting beaten up becoming ‘the new black’, to see Geek Chic become the norm.

But I want to be clear that I’m not too bitter about this development.  I think it’s wonderful to be able to wear an Iron Man t-shirt, or say that I loved Guardians of the Galaxy, without being looked at as an immature man-child.  It’s relieving to see things I’ve enjoyed for most of my life finally becoming something everyone loves.  There are folks that like to play at being some rebel, liking a band when hardly anyone knows them, but resenting that band once they achieve a measure of success.  I think that’s a pretty pathetic mindset, and I won’t have that attitude about the Realm of All Things Nerdy opening its portals to the masses.  I instead choose to rejoice in the fact that my childhood and teenage loves got their due.  I even got back into the role-playing games 2 years ago, and hardly anyone bats an eye when we meet in the food court at Wegman’s to play.

I suppose that it’s all because Star Wars as a franchise has thrilled so many despite the terrible ‘prequels’.  Or maybe it was that, as later generations picked up on the Star Wars franchise, they also had their imaginations piqued by Harry Potter, the fantastically written and portrayed series (I consider it the Star Wars for their time).  Maybe it’s just the fact that so many of the superhero movies are so entertaining.  Perhaps it’s because of a major confluence of all these things, and more.

I’m not sure how it happened; I’m just glad it did, that things I’ve enjoyed for most of my life are finally getting their due and being enjoyed by so many.  I love that NERD is the word, and that GEEK is chic.  You know what?  Maybe this means that I was actually an early bloomer after all….