My animal advocacy page, Pet Patriotism, now has 199 followers.  Un.  Be.  Lievable.  One person shares it, and three more check it out and “like” it, and it keeps going.  It’s only been a week and a half since starting it up.  Ca-Razy.  I feel a certain pressure to keep these folks happy and interested in what I’m doing.

I admit there’s very little info which I have the knowhow to find.  I pretty much come across other postings and repost them myself.  It’s not to claim credit for it; I’m not erasing the originator’s tags on there.  It’s just that I want to keep the information flowing.  I might subscribe to a certain page that others may not.  You can’t subscribe to everyone–there’s not enough time to read it all.  If someone gets their info from me, great.  If they get it from somewhere else, great.  The point is to keep it all out there, educating more and more people and getting profiles of animals in trouble or petitions that need signing to cycle onwards to those that will help.

I don’t remember if I covered why I set this page up or not.  A friend actually messaged me asking me to “Please stop”.  It was in reference to an item I shared with a picture showing a pretty gruesome wound on a dog.  I knew when I shared it that I’d probably face opposition, but I shared anyway because every share was going to raise another dollar towards care for the dog.  I know that perhaps only three or four of my 93 or 94 friends on Facebook actually care to sign these things, can or will donate, or can spend time networking my posts.  So between reaching people that care and not pestering my friends, I set up the separate page.

I foresaw that this was going to be time-consuming, and boy I was right.  I was already spending a lot of time on Facebook and my email account as it was.  Now I’m taking the time to cross post it TO MYSELF, essentially, on my new page and sharing from there.

After the first week, I decided to take Tuesday the 6th off.  I still went in there a little, but I needed a break from the 24 hour media stream plus 40 hour work week.  Also, my own dog was being neglected regarding attention, which would not be good in general, and definitely not from someone who claims to be all about animals.

I realized that my voice was rather silent that day, but the world still turned.  And others were there filling my void.  Did I miss a petition or two?  Probably.  Did I fail to get something forwarded to someone that may have helped?  Possibly.  But I can only do so much.  There’s guilt, but there’s also reality.  I’ve made the decision that anytime I log in, I will only scroll back through four hours worth of material at most.  I used to go back all the way, even if it was ten or twelve hours, fearful something important would get by me.  I wrote in a previous post that I am a recovering addict (alcohol; two years sober), and I am left wondering if this is another form of addiction, even if it’s a meaningful one.  So I must impose limits, addiction or not.

It seems that some of the people that are informing me are doing this full time.  They are largely female, and, I believe, older, so they may be stay-at-homers with working spouses or are retirees, either of which having a great deal more time in theory.  I’m jealous.  I don’t know if they actually get paid for any of their time.  I doubt it, but if so, I’m jealous again.  Not because I want to profit, per se, but I would love to support myself this way and therefor be able to do this kind of thing all the time.

I previously mentioned reducing meat from my diet, for obvious reasons.  Well, I’ve spent the last two weeks primarily meat free.  I ate chicken three times, and that’s it.  I had already weeded lamb and pork from my diet, and beef and dairy are now gone.  Going forward, I may or may not occasionally eat chicken, eggs, and seafood.  The reason I ate chicken the three times I did was because I am getting some digestive upset from the continuous intake of fruits and vegetables.  A friend hypothesized that it could be all the live enzymes and fiber.  Going from forty years of meat, bread, pizza, and ice cream to this is tough.  So I’m throwing the chicken in there from time to time to make it a more gradual change and hopefully easier on my system.  I feel good about this.

The Tale of the Fox goes on…. 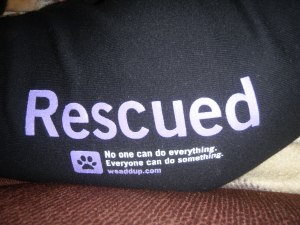 Exactly why I keep doing this….

I’m obviously kind of gangbusters with animal rights issues if you know me or have read previous posts of mine.  One of the major issues I have WITH MYSELF and all of the stuff I do online for animal rights and such is the fact that I DO eat meat.  Go on, call it hypocrisy, call me full of shit, call me what you like.  You’d likely be right, and I’m telling you now that I have a hard time dealing with my diet when it comes to my conscience.

I even tried going vegetarian two years ago.  I still ate seafood a few times per week, because I was worried that my system would go into shock after over 35 years of just eating meat, bread, and ice cream.  I thought cutting that type of protein out of my life “cold turkey”, if you’ll pardon the phrase, would be harmful to me.  So seafood stayed, with plans to phase it out over time.

I was sick for the entire 5 month period.  I ate salads and other mostly raw vegetables, ate less junk food, should have been healthier than ever before in my life.  But I was weak, tired, ill-feeling, and had cold-like symptoms.  I spoke to 2 full-on vegans I worked with about it. Their responses?  “Oh, yeah, I was sick for 2 whole years when I gave up meat.”  I was like, “There’s no way in Hell I’m going to feel like this for two years….”

I went back to eating meat, and within 2 weeks, I felt like myself.  I know it would be easy to say that this was all some self-fulfilling prophesy, that I really wanted to eat meat, wanted to believe I needed it, and so therefor I got what I wanted.  Not so.  I really wanted to make this change and was convinced I was doing the right thing, “becoming an enlightened person”.  I later heard something that people with different blood types require different food types (makes sense, really), and that O blood types require proteins from meat.  I am an O Positive blood type.  Again, I want to stress that this was a revelation that came AFTER I’d already conceded defeat on the vegetarian diet.

Doing the things I do for animal rights and such, it still eats at my conscience (pardon the use of that phrase, too).  I see a lot of things about how food animals are raised and treated.  Today I saw a video showing the abuse of chickens by throwing them around, merciless beatings of pigs while they squealed in pain, and cows watching while other cows are hoisted up, thrown onto a table and having their throats cut by hand.  The camera closed in on the cow’s eye rolling back while its life left its body.  Within the last week I saw a film of a camel that was forced to the ground and had its knees tied into a permanent kneel to hobble it, and then had a guy go forth and repeatedly stab it in the chest.

I’m sorry to drop all of these images on you, but this is, well, what it is.  I have given up the eating of pork and lamb, because I’ve seen video and heard stories of both animals being kept as domestic pets.  I’ve seen film of pigs and lamb reacting in such cases in ways very similar to my beloved canine species.  Since they can be companion animals on that level, I can no longer justify myself consuming them.  So I’m down to chicken and beef.

Today I actually had a vegan egg and sausage sandwich for lunch; the doorway is still open for change.  Perhaps I will one day make another run at changing what it is on which I subsist, or at least diminish the amount of animal product I consume if not entirely cut it out of my diet.